Merits and lessons of a round-based game

In today's world of always-online, push notifications, and loot boxes - is there still any merit to round-based gaming?

Realistically, the days of hundreds of people logging into a text-based game each week to see the happenings at the end of the round are probably over. Back in the day, some games saw thousands online when a round was coming to a close. There was lots to organize, and generally lots of attacks flying around. I get a pang of nostalgia just writing about it. Assembling your crew from around the world, coming up with a game plan for the end of the round, and seeing the fruits of your efforts are gaming memories that are hard to forget.

What is a Round?

In gaming terms, a round is a period of play. Players will usually start with nothing at the beginning of a round. There are usually incentives or prizes for "winning" in each round. Games may do this for various reasons. Rounds tend to mitigate the day-one-player effect - New players can come in and compete with long-term players. There may be benefits to giving players a breather. And, historically, an "end-of-round" (EOR) period shortly before the round ends would usually be very well attended.

Types of rounds in Mafia games

Traditionally, a round on a Mafia RPG online would be 7-10 days. Some games ran month-long rounds, and some to this day still run 3-month rounds. As player habits changed, game designers reacted (slowly) and introduced mini rounds. These were shorter (1-4 days) and brought the added benefit of having two EORs per week. Mini rounds typically run alongside regular rounds and give the opportunity to play both at once. At Made Man Mafia, we introduced 2-hour Turbo rounds. These go further towards micro-rounds where a short burst followed by prizes rewards players. 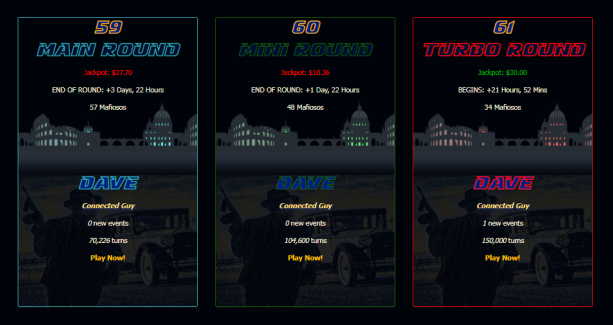 An example of Made Man Mafia running three simultaneous rounds.

The whole concept of the round is fairly unpopular these days unless you take into account golf and boxing. In gaming terms, it's a bit of a relic. Player habits have changed massively over the last decade. Every app, website, and tech company is desperate for your attention. Remembering to log in to that game you've recently found is hard when you have a hundred notifications on your phone. Competition is fierce, and it's easier to play another level on that mobile game than make a round-winning play on that browser game you logged into once. There's also the issue that you have to start over in the next round.

You might ask, "So why are you concentrating your efforts on a round-based game in 2022? And after all you've just read, you'd be right to ask.

Well, a few of the original reasons for running rounds still hold true.

The level playing field between players who have played 5 years or 5 days.

The EOR period can still be exciting when there are prizes on the line. There is also a great deal of flexibility now with how we run rounds. Players can vote, and admins will customize rounds to change up the gameplay experience.

Prizes awarded at the end of each round are still attractive. (more on this below...)

Design Considerations for working with rounds

It would be prudent to re-iterate a couple of the earlier points here.

We believe an important aspect of game design is understanding when to try and change player behavior, and when to adapt the game to it. On the first point, that ship has sailed. It would be foolish to try and make things as they were. If EOR isn't the big attraction that it once was, players need to have the opportunity to win prizes that don't solely rely on their performance in the final hours. We are designing more features like Family Ranks so that your strategy and commitment over the entire round is counted.

The loss aversion principle suggests that starting over will be felt as a loss. We can flip that by converting sunk costs (turns) into a more enduring format (credits) through awarding of prizes. Start players off with more reserves for joining new rounds early, and offer the choice of a new name.

Here you can see that players can win credits and MMM Cash to "lock-in" their rewards for each round.

We shouldn't simply capitulate on this point. We're introducing new measures such as the upcoming EOR tracker on Anarchy Web Design to keep players informed about which games have EORs approaching. We are also improving outreach and player communications to remind players of upcoming EORs.

This does need a little re-framing though. It's easy to see lower player numbers and get pessimistic about the state of text-based games. We can replace some of the missing player activity with competitions such as trivia which creates a buzz. We can also introduce late-game features which shake up the status quo.

Try play a round now, see if you can win

You can join rounds in under a minute. You can play from anywhere and if you're good enough, you can win in your sleep! 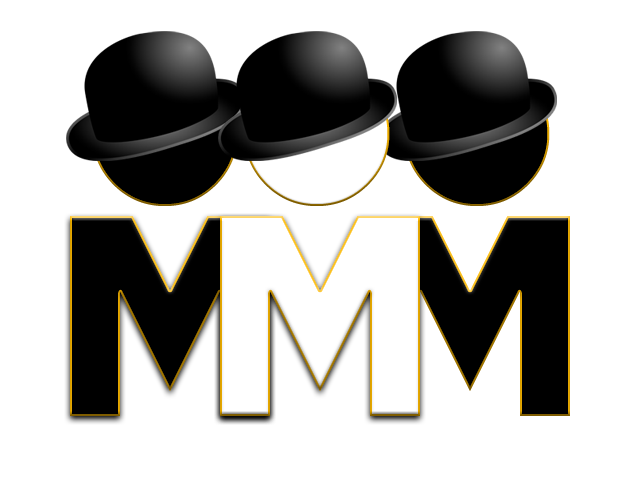